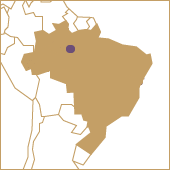 VINCI Airports has taken over the operation of Manaus airport the 12th of January 2022, under a 30-year concession contract awarded by Brazilian civil aviation in April.
Third cargo airport in Brazil, Manaus airport is a pillar of the economic and social development of the Amazon. VINCI Airports will work to develop the cargo activity of this platform by optimizing its operation.
Building on the good environmental performance of Salvador airport - which has become "the most sustainable airport" in Brazil since it took over operations in 2018 - VINCI Airports will also deploy its environmental action plan in the Amazon. The objective is to reduce the CO2 emissions of airports - notably through the construction of a solar farm - and to improve their water and waste management. Finally, a forest carbon sink program will be implemented there, to sequester their residual CO2 emissions, while helping to protect the Amazon rainforest and biodiversity.