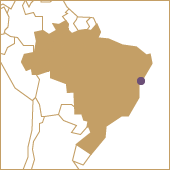 On completion of a call for tenders initiated by ANAC (Agência Nacional de Aviação Civil), VINCI Airports was awarded the concession for the 9th Brazilian airport in March 2017. VINCI Airports signed the Concession Agreement on July 28th covering operation, maintenance and extension-upgrading of the existing terminal and the runways system. After two initial transition phases, during which VINCI Airports prepared and started implementing its transition plan while Infraero continued running the airport with its assistance, on January 2nd VINCI Airports officially became the operator of Salvador airport.
Salvador Bahia International Airport has been recognized by Brazil's National Civil Aviation Agency (ANAC) as "Brazil's most sustainable aerodrome in 2019". Since it has joined VINCI Airports network in 2018, the airport is regularly rewarded for the many virtuous initiatives put in place, in the areas of greenhouse gas reduction, energy efficiency and wildlife risk management.
For example, it is:
- the first airport in Brazil to have installed a solar plant producing green energy for its terminal and to achieve zero waste to landfill and the only one to maintain this objective even during the covid-19 crisis.
- the only airport in Brazil to be zero liquid discharge, with 100% of treated wastewater recycled in toilets and for the air-cooling towers
- certified ACA Level 2 by ACI
- 100% LED equipped