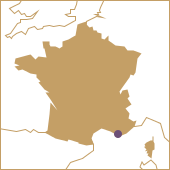 Toulon-Hyères airport is one of the three French airports with mixed civil and military use and offers up to 7 daily rotations to Paris Orly and Roissy Charles-de-Gaulle, 2 regular services to Brest and Brussels, as well as multiple seasonal routes. Located opposite the beaches of Hyères, halfway between Provence and the French Riviera, Toulon-Hyères airport is ideally situated in the heart of the Var, France's leading tourist department after Paris.

As the departure and arrival point for ferries to Corsica and cruise ships, the airport is less than 50 km from many of the Var's most emblematic sites, including Saint-Tropez.

In 2020, VINCI Airports delivered the most important modernization work at Toulon Hyères civil and military airport since its creation in 1967. These works include the renovation of the two runways and taxiways, the refurbishment of the aeronautical lighting and compliance with water law.

As part of VINCI Airports' sustainable development policy, the work will also improve the airport's environmental performance. It is notably thanks to this type of initiative that the airport has renewed its ISO 14001 certification.