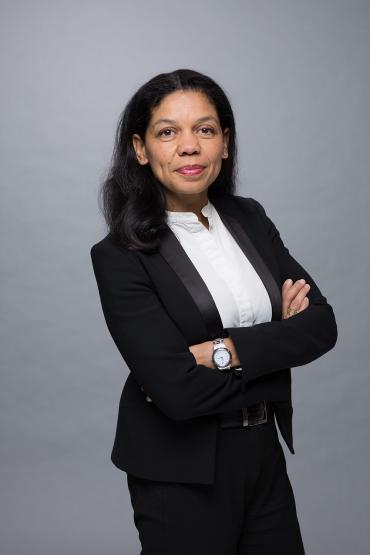 Managing Director of VINCI Airports in charge of France, Chile and the Dominican Republic, Valérie Vesque-Jeancard oversees the Group's 19 airports in these countries and manages VINCI Airports' commercial presence in France, Spanish-speaking South America and the Caribbean.

Valérie Vesque-Jeancard is a graduate of the Ecole Polytechnique and the Ecole Nationale des Ponts et Chaussées, and holds a postgraduate degree in economics from the Ecole d'Economie de Paris. She was a consultant at the World Bank in 1992/1993, before joining France’s Ministry of Economy and Finance, where she held several positions between 1994 and 2001. She served as an auditor of the Cour des Comptes (French national auditing body) from 2002 to 2005 and was appointed Deputy CEO of France’s National Library (BnF) in 2006. Mrs Vesque-Jeancard became Deputy Secretary-General of the Ministry of Culture and Communication in 2010 and joined the Réunion des Musées Nationaux-Grand Palais in 2011 as Deputy CEO.
After spending more than 20 years in international project financing, at the head of cultural institutions and in the retail industry, Valérie Vesque-Jeancard was appointed Managing Director at VINCI Airports in 2018.
She chairs the Supervisory Board of Aéroports de Lyon, the Strategic Council of the Société des Aéroports du Grand Ouest and the Board of Directors of Aerodom (Dominican Republic); she is a member of the Board of Directors of Nuevo Pudahuel (Chile) and Coriport (Costa Rica).
Valérie Vesque-Jeancard is also Vice President of the ‘Union des Aéroports Français’ and a member of the Board of Directors of ‘Atout France’.

In addition to her position at VINCI Airports, she became President of VINCI Railways in June 2021.