Several airports operated by VINCI Airports in Portugal, Chile, Costa Rica or in the US, have been awarded "Voice of the Customer Recognition" as an initiative of ACI World, the international airport organisation. It’s a great, and new, recognition for airports that have continued to give priority to their customers and have remained committed to ensuring their voice is heard despite the covid-19 pandemic. 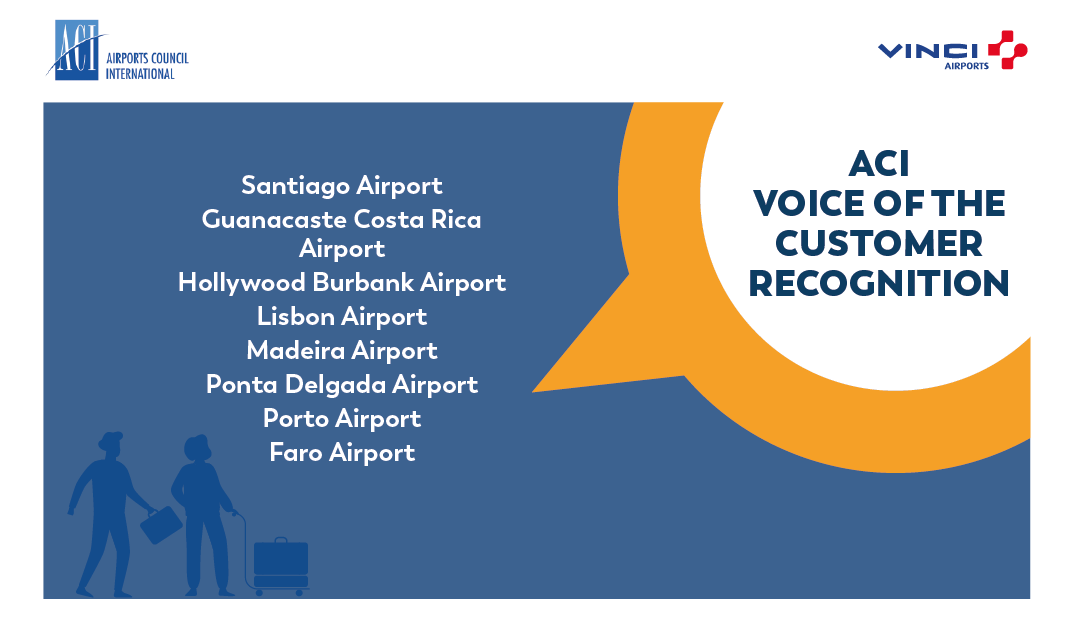 Guanacaste in Costa Rica, Santiago in Chile, Hollywood Burbank in the US and in Portugal Lisbon, Porto, Madeire, Ponta Delgada, Faro, the eight airports operated by VINCI Airports have been praised by ACI World for their initiatives and commitment for customers despite the pandemic situation.

In Chile for instance, Santiago airport notably set up dedicated platforms to listen to the passengers customers 24/7, adding new tools such as our "customer booklet needs", where the customer service agents write down services or requests from the passengers. The airport also developed new performance standard for customer relations: all requests or inquiries must be answered within 24 work-day hours. Finally, the team mobilizes its social networks to greet customers on special occasions like their birthdays and, when a passenger donates a tree, his or her picture is upload on the airport’s website and his or her favorite song is added to the airport’s special Spotify Channel.

Other example in Portugal, where, following the "Best European Airport 2020" award from ACI Europe for Lisbon airport, this new recognition distinguishes - once again - the responsibility and commitment of ANA and VINCI Airports in the face of the COVID-19 pandemic. Each of the five Portuguese airports, "has made significant efforts in gathering feedback from passengers through ACI's Airport Quality of Service (ASQ) programme, which helps it to better understand its customers and inform their commitment to provide a superior customer experience in difficult circumstances," said Luis Felipe de Oliveira, General Manager of ACI World.

As a VINCI Airports’ centers of Excellence, Lisbon airport has also continued to innovate in the context of Covid-19. The airport developed a digital platform - U-monitor - accompanies the sanitary measures and records passengers' feedback with real-time response through QR-code. Besides, it implemented new contactless solutions and the use of disinfection equipment with advanced UV technology for large areas and equipment such as counters, baggage carts, x-ray trays.

The agile and efficient response in implementing the health measures demonstrates the ability of the teams to adapt, which has allowed national airports to remain fully operational throughout these months.