Yesterday, a ceremony was held at Lyon-Saint Exupéry to celebrate ACI's (Airport Council International) Best European Airport 2019 Award to the Lyon-Saint Exupéry airport (Category 10 to 25 million passengers). This award is the result of the very strong commitments made by VINCI Airports and the airport teams in the fields of the environment, innovation, quality of service and customer satisfaction. This is the first time since 2010 that a French airport has been included in the ACI's list of achievements. 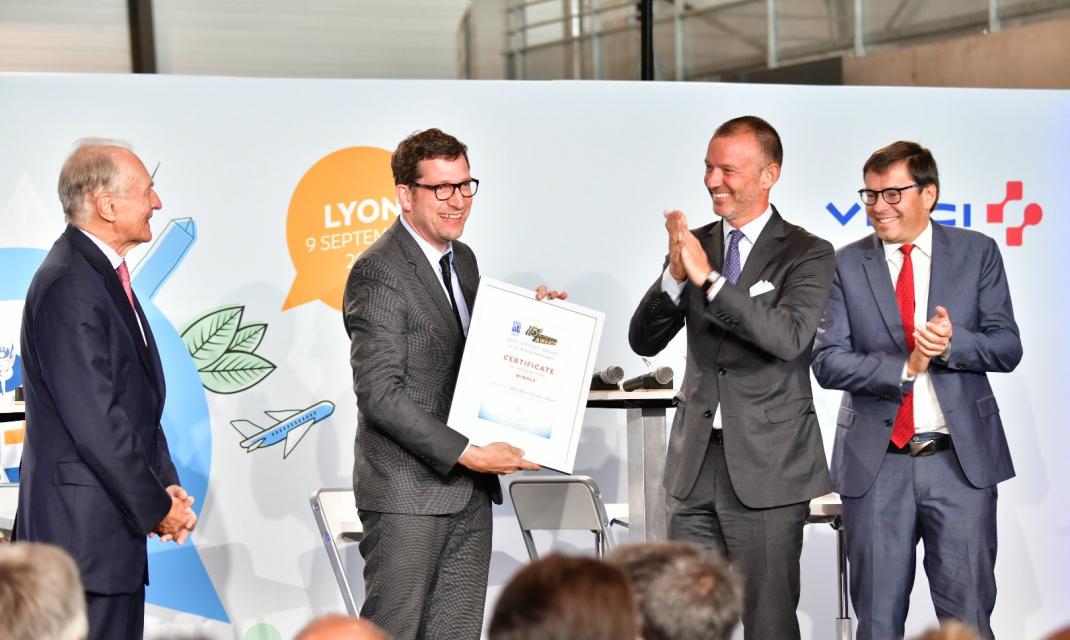 The award was presented by Olivier Jankovec, Director of the ACI, in the presence of Xavier Huillard, Chairman and CEO of VINCI, Nicolas Notebaert, CEO of VINCI Concessions and President of VINCI Airports, Valérie Vesque-Jeancard, France and Americas Area Director of VINCI Airports and Chairman of the Supervisory Board of Aéroports de Lyon, Tanguy Bertolus, CEO of Aéroports de Lyon and all the political players in the region, including Gérard Collomb, Mayor of Lyon, David Kimelfeld, President of the Lyon Metropolitan Area, Christophe Guilloteau, President of the Rhône Department, Étienne Blanc, 1st Vice-President of the Auvergne-Rhône-Alpes Region, and Emmanuel Imberton, President of the Lyon Métropole Saint Etienne Roanne CCI.
This award confirms the very positive operating results achieved by VINCI Airports since 2016:
- Strong development of airport connectivity, with 52 new lines opened, including Warsaw and Beirut, two capitals now linked directly to Lyon;
- Growth in the number of visitors: 11 million passengers in 2018, an increase of nearly 27% in three years;
- Improving the customer experience through the implementation of new world-class services such as valet parking and bus-rail-air connectivity;
- Continuous environmental performance, with the ACA 3+ accreditation in 2017, which certifies the airport's carbon neutrality.
To continue and amplify this dynamic, VINCI Airports has announced new ambitions for Lyon-Saint Exupéry. In terms of service quality, the airport is becoming one of VINCI Airports' three centers of excellence for innovation, alongside Lisbon and London Gatwick airports. VINCI Airports will make Lyon one of its leading airports, experimenting with the latest digital, biometric or artificial intelligence technologies, before deploying them to benefit all 46 airports in 12 countries.
Among the most environmentally exemplary airports in the world, Lyon-Saint Exupéry will set out best practices to achieve VINCI Airports' ambition for its entire network.