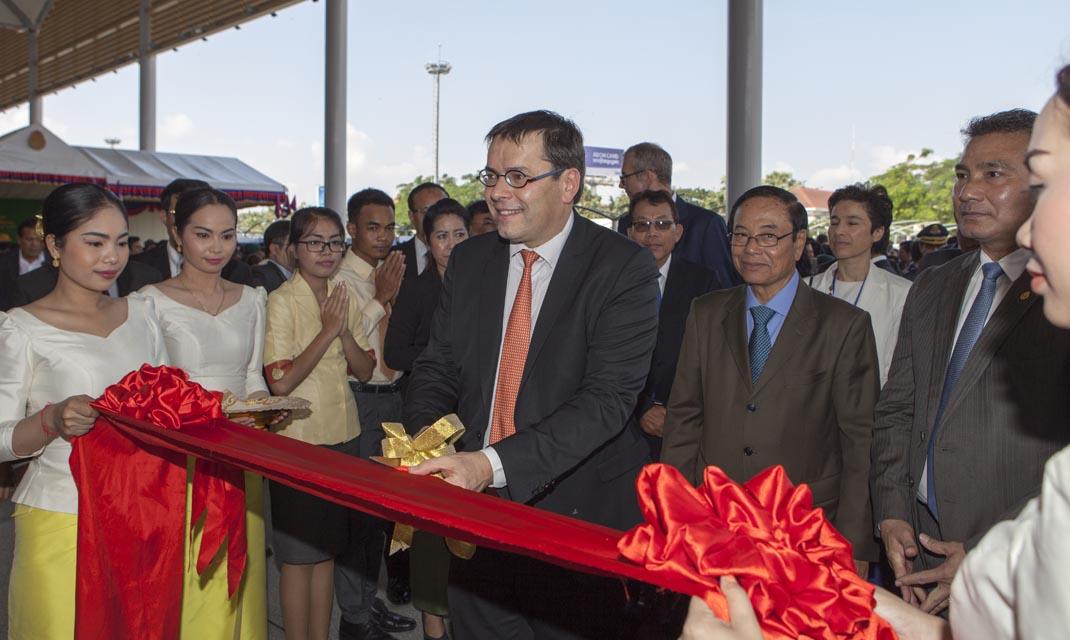 More than 10,000 square meters have been added to the existing passenger terminal and some areas were fully renovated. The extended Arrivals Hall has been equipped with 2 new conveyor belts, conferring comfort to passengers and contributing in speeding up baggage delivery.

The Domestic Departure Concourse was expanded and 2 additional boarding gates were commissioned. With its modular design, the lounge can conveniently be converted to cater to international passengers in case of operational needs, especially to ease flows at the departure lounges.

At the Arrivals exit, a spacious esplanade, adorned at its center with a pond and a hand-carved 20-ton statue representing Khmer symbols of peace and prosperity, welcomes arriving passengers and meeters & greeters. Also, the meeting point is filled with new commercial offerings including food & beverage outlets and kiosks providing telecommunication services, information to tourists, and transports to the city.

VINCI Construction Grands Projets partnered with Muhibbah for the construction and renovation program.

Nicolas Notebaert, CEO of VINCI Concessions and Chairman of VINCI Airports, said: “With this investment program, we want to keep pace with traffic growth and bolster our airport capacity. Along with the network’s two other airports, Phnom Penh international Airport is fully prepared to accommodate the 7-million visitors expected in Cambodia by year 2020 and beyond.”

The Deputy Prime Minister emphasized the critical overall impacts of the airports activities on Cambodia’s economy and development. In a study carried-out in 2015, the airports in Phnom Penh, Siem Reap, and Sihanoukville accounted for 17% of the country’s GDP and provided jobs for 20% of its working population.