VINCI Airports, ANA Aeroportos de Portugal, and the Regional Government of Madeira formalized the partnership protocol for the plantation of trees in Porto Santo Island, with a visit to the land granted by IFCN for the plantation of 500 trees in 2021. This action was attended by the President of the Regional Government, Dr. Miguel Albuquerque, the Regional Secretary for the Environment, Dr. Susana Prada, the Chairman of the Board of Directors of ANA, Dr. José Luis Arnaut and the Chief Executive Officer of ANA, Mr. Thierry Ligonnière. 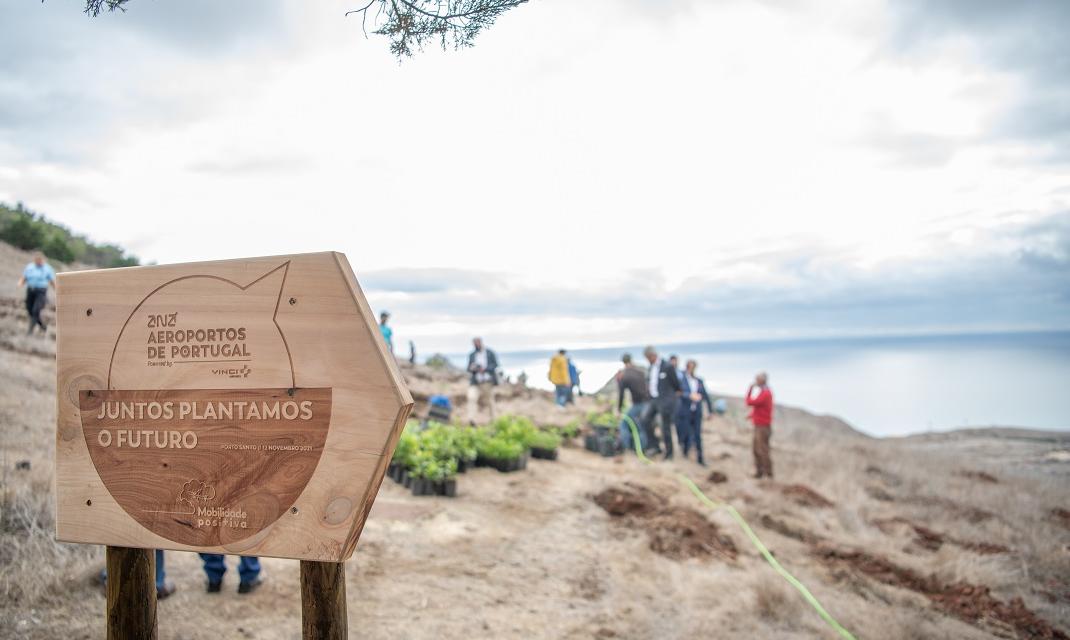 Reforestation initiatives are part of the priorities and commitments of VINCI Airports to achieve Net Zero Emission on all its European network of airport by 2050. ANA-VINCI Airports supports the project of the Regional Government of Madeira for the Reforestation of Porto Santo Island, through the planting of 500 trees in 2021 on a plot of land provided by the IFCN on the island. Besides promoting biodiversity and improving the management of water resources in the local community, this project will take advantage of the carbon capture potential of the reforested area to locally offset the airport's residual carbon emissions.
During the next 5 years, the reforested area will be maintained and an additional 100 trees will be planted each year, up to a total of 1000 trees planted in 2026.
ANA|VINCI Airports assumes, through the operation and investment in Porto Santo Airport, a prominent role in the economic activity and in the sustained development of the island. Aligned with the Strategy for Carbon Neutrality and with the objectives and targets set for biodiversity protection, with this initiative - "We plant the future", ANA intends to give its contribution to the reforestation work started more than a century ago on the island.
Thierry Ligonnière, CEO of ANA Aeroportos de Portugal, highlighted the importance of this action that "will have an important direct impact in the future. All environmental actions are relevant, but in the specific case of this island, reforestation is urgent and fundamental to obtain such critical resources as water. It is with great enthusiasm that VINCI Airports begins the reforestation actions in Porto Santo, assuming with concrete initiatives our commitment with decarbonization, promoting a positive mobility".
The island of Porto Santo was elected in 2020 as a Biosphere Reserve and the intention is to turn it into a "Green Island", free of greenhouse gas emissions. The reforestation of the island, formally initiated one hundred years ago, remains a very relevant goal for the Regional Government of Madeira.