Following VINCI Airports and Groupe ADP’s environmental plans, Nuevo Pudahuel has made the first step to assure Santiago Airport, Arturo Merino Benítez, becomes the first in Latin America to incorporate the use of hydrogen in its operations. Along with a group of leading energy companies (Air Liquide, Copec and Colbún), the concessionaire signed a Memorandum of Understanding (MoU) in order to work on a plan to incorporate this carbon-free fuel into the operations of Chile’s main airport. 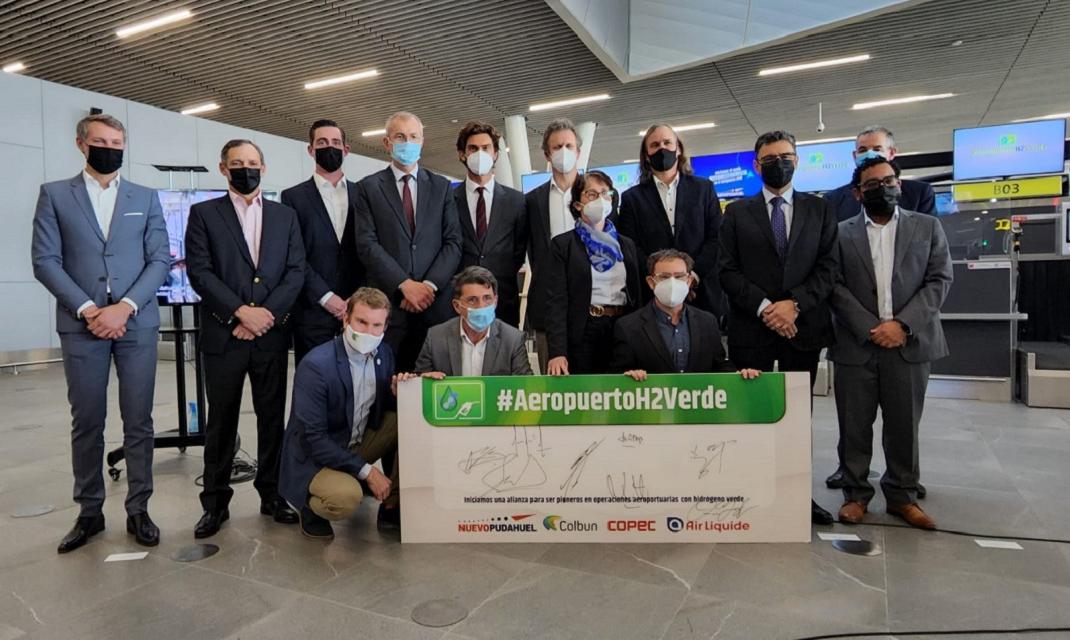 Nuevo Pudahuel’s shareholders, VINCI Airports and Groupe ADP, have taken the lead in promoting this energy worldwide, with first developments in France and Japan. In 2021, VINCI Concessions and a group of major companies launched the first clean hydrogen infrastructure fund and in 2023, Lyon-Saint Exupéry airport will have the first hydrogen facility.
The agreement to replicate the experience in Santiago was signed by the highest representatives of Nuevo Pudahuel, Air Liquide, Colbún and Copec. The ceremony included the Ministers of Public Works, Juan Carlos García; Transport and Telecommunications, Juan Carlos Muñoz; and Science and Technology, Flavio Salazar; and the Viceminister of Energy, Julio Maturana; and the Ambassador of France in Chile, Pascal Teixeira da Silva, marking the beginning of an alliance to implement hydrogen in a pioneering way at Santiago Airport.
The complementary experience of each of the locally based companies will bring together all the necessary elements to establish a more sustainable ecosystem within the Arturo Merino Benítez airport complex.
Air Liquide will lead the development of the study, in close coordination with Nuevo Pudahuel. In addition, the company will use its hydrogen production and distribution expertise to build and operate an electrolyser for green hydrogen production and the associated hydrogen supply chain. Colbún, leader in the generation sector in Chile, brings its experience in renewable energies to the project. Copec, the main operator of service stations in Chile, will contribute with its experience in fuel storage and supply systems, in addition to the projection to estimate the demand for hydrogen that this initiative will have, considering its current participation in the aviation fuel market inside the airport.
This initiative will specifically contribute to the goal of the Arturo Merino Benítez Airport in Santiago de Chile to reduce greenhouse gas emissions by 40 percent by 2030 and achieve carbon neutrality by 2050.

“As a concessionaire, we have a commitment to the State of Chile. We recently delivered a new terminal, which considerably increases the quality and areas for international flights. We are promoting its use with new routes and new airlines, but we need to do it making sure we grow while acting for the care of the environment. We do it by using this clean energy, in the development of which our key shareholders have been pioneers. Green hydrogen will allow us to support the growth of air transport in harmony with the environment.” Xavier Lortat-Jacob, general manager of Nuevo Pudahuel.