VINCI Airports announces the first carbon sink of Lyon airports, in partnership with the Rhône department and the French National Forest Office

Nicolas Notebaert, CEO of VINCI Concessions and President of VINCI Airports, announced today a local reforestation program that will absorb residual emissions of Lyon-Saint Exupéry and Lyon-Bron airports, operated by VINCI Airports since 2016. 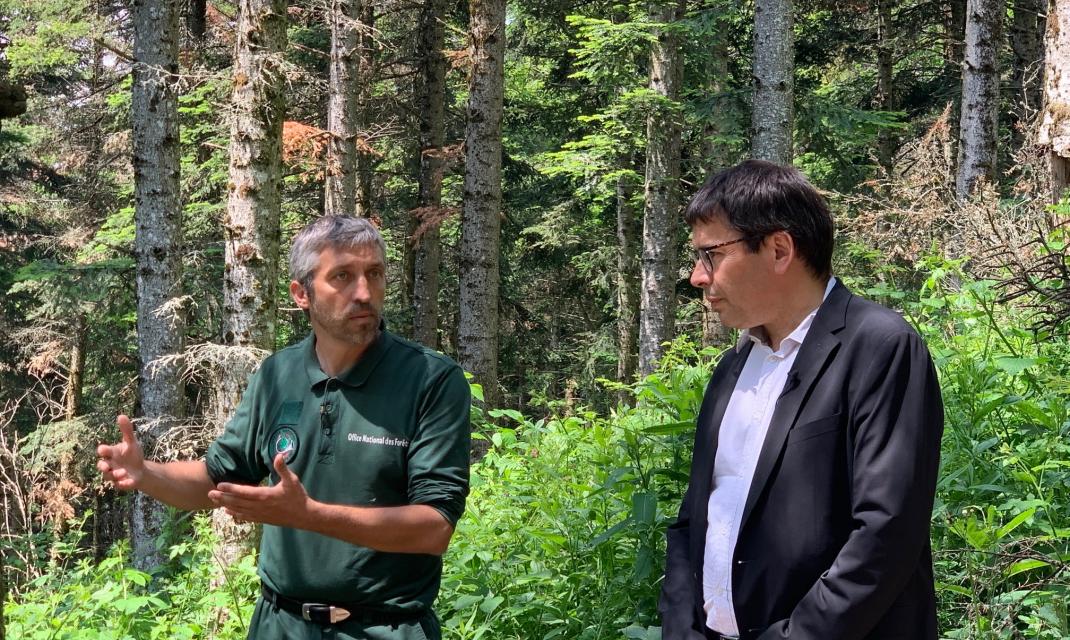 The first project of this programme, conducted in partnership with the French National Forest Office and the Rhône Departmental Council, is located about 30 kilometers away from Lyon-Saint Exupéry airport, in the Cantinière forest. It consists in restoring, reforesting, maintaining and managing a 3.6-hectare plot of land with locally resilient species selected for their strong capacity to adapt to water stress and absorb CO2. This first forest carbon sink project will sequester more than 500 tons of CO2 over the plants’ growth period thanks to photosynthesis, and aims at achieving the Low Carbon Label certification.

By developing other similar projects within a five-year framework agreement with the Rhône department, VINCI Airports will create a network of forest sinks in the Rhône region that will offset 100% of Lyon airports’ residual emissions. In support of the many decarbonisation actions underway, this programme will enable Lyon-Saint Exupéry airport to become the first commercial aviation airport in France to achieve " net zero emissions" by 2026.

VINCI Airports will also offer airlines to join this forest carbon sink programme - within the framework of the French Climate and Resilience law, which will require the compensation of domestic flights as of January 1st, 2022 - and then to companies or passengers on international flights.

VINCI Airports has chosen to act locally, with a positive impact on the immediate area of influence of Lyon airports. As a long-term partner of the Rhône-Alpes local authorities, VINCI Airports is thus supporting the development of the forest sector as a lever of regional economic development.

Nicolas Notebaert, CEO of VINCI Concessions and President of VINCI Airports, declared: "It is in the very heart of the regions and territories where we operate that VINCI Airports is taking action. Our network, both deeply territorial and broadly international, allows us to have a tangible and immediate impact to contribute to the decarbonisation of mobility, wherever we operate.”

Christophe Guilloteau, President of the Rhône Department, said: "I am delighted with this first partnership between the Rhône Department and Aéroports de Lyon (VINCI Airports). The aim is to reforest plots of land in the department’s forests. This project will meet the regulatory requirements of the "Low Carbon Label" and will contribute to the future of the departmental forests. It is part of the continuity of actions carried out in favour of the preservation of our territory. "

As the first airport operator to take action for the environment on a global scale, VINCI Airports has already reduced CO2 emissions across its network by 22% between 2018 and 2020. The forest carbon sinks are part of VINCI Airports' action plan to contribute to the decarbonisation of aviation with all the players in air transport. Other initiatives include sustainable airports, incentives to renew airline fleets with less emissive aircrafts, development of biofuels, and the preparation of airports for the arrival of the hydrogen aircraft.

About VINCI Airports
VINCI Airports, the world’s leading airport operator, manages 45 airports in 12 countries in Europe, Asia and on the American continent. Though its expertise as a comprehensive integrator, VINCI Airports develops, finances, builds and operates airports, leveraging its investment capacity, international network and know-how to optimise operational performance, modernise airports and manage their environmental transition. In 2016, VINCI Airports was the first airport operator to commit to an international environmental strategy aimed at achieving net zero emissions over its entire network looking to 2050.