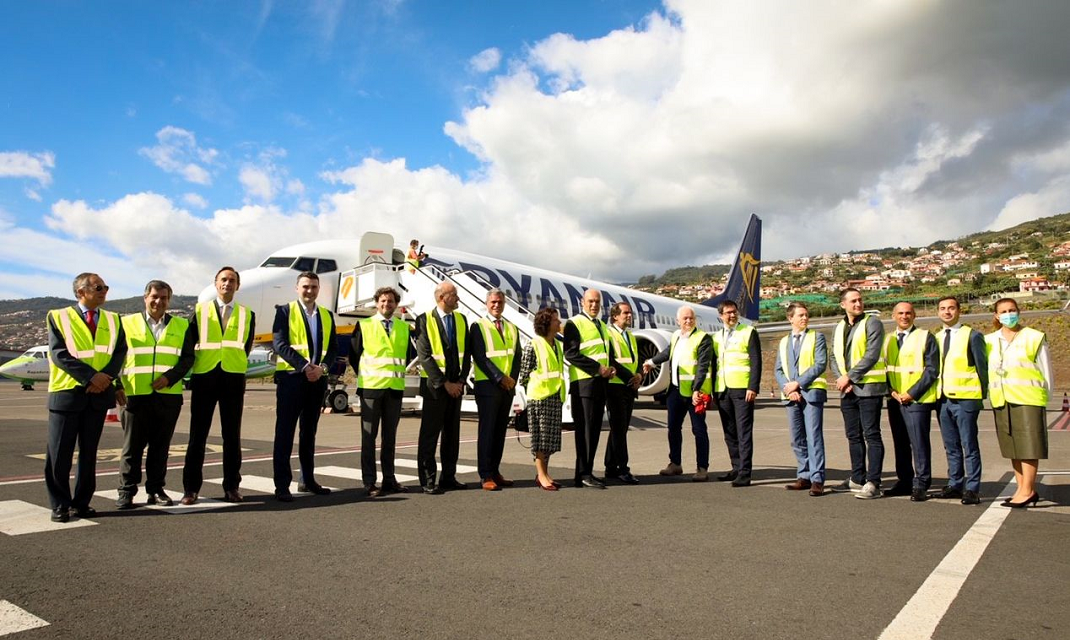 VINCI Airports, ANA - Aeroportos de Portugal -, Ryanair, Madeira’s Regional Government /Madeira Tourism Board and the Portuguese Government/ Portugal’s Tourism Board announced, today, at a joint press conference, the opening of Ryanair's new base in Madeira, Funchal. This event, which took place at Madeira airport, was attended by Pedro Siza Vieira, Minister of State, Economy and Digital Transition, Miguel Albuquerque, President of the Regional Government of Madeira, Thierry Ligonnière, CEO of ANA Aeroportos de Portugal |VINCI Airports and Eddie Wilson, CEO of Ryanair.   As a central element of VINCI Airports business strategy, airline development enables the long-term development of the region and communities, offering a greater connection to the world for citizens and the economy.   Ryanair’s decision to open a base in Madeira builds on consistent investment brought by VINCI Airports that has been increasing the airport’s appeal to airlines and passengers. Ryanair already operates in 11 airports of VINCI Airports network and is the second largest airline operating in Portugal, being the first in Porto and Faro airports. It currently operates three bases in Portugal: Lisbon, Porto and Faro. The fourth will be in Madeira. This base operation will bring the opening of new routes: 40 new weekly frequencies, 10 routes of which 5 will directly connect Madeira to new destinations. This new connectivity will contribute to the diversification of issuing markets and will increase the resilience to market variations, critical factors for tourism in Madeira.   In accordance with VINCI Airports' environmental ambition, ANA has driven the environmental transition in Madeira's airports, with initiatives in the areas of energy and climate change, circular economy and protection of natural resources, including the reforestation action carried out last November 12th in Porto Santo with the IFCN and the Regional Government, which will allow the offsetting of carbon emissions in the future.   Thierry Ligonnière, CEO of ANA and VINCI Airports' director for Portugal and Brazil, stated that: "The announcement of Ryanair's base in Madeira for the summer of 2022 is excellent news for the Autonomous Region of Madeira. This base is the result of a partnership with Ryanair, with the Madeira Tourism Promotion Association and with the Portuguese Tourism Board. Besides reinforcing the existing global partnership between VINCI Airports and Ryanair, this base will allow, through the opening of 5 new destinations routes in 2022, a significant increase in Madeira's air connectivity, boosting the diversification of tourist markets, so important for the recovery and growth of tourism in the region. This is yet another example of VINCI Airports/ANA's strong commitment to promote the economic and sustainable development of the regions. Along with route development, we remain committed to implementing environmental initiatives that realize our commitment to decarbonizing the sector, promoting positive mobility."   The Regional Secretary of Tourism and Culture and President of the Madeira Promotion Association, Eduardo Jesus, said, "The strengthening of air accessibility to the Autonomous Region of Madeira is always good news. We now have more seats available for new international connections and to reinforce existing ones. This increase meets the needs of the resident population and the purposes of the tourist destination itself".   VINCI Airports is the world’s leading private airport operator, running 45 airports in 12 countries in Europe, Asia and North and South America. With its expertise in global integration, VINCI Airports develops, finances, constructs and manages airports exploiting its investment capacity and expertise in operational performance optimisation, infrastructure modernisation and environmental transition management. In 2016, VINCI Airports became the first airport operator to adopt an international environmental strategy in order to reach net zero emissions for the entire network by 2050.
/