VINCI Airports receives twelve awards for seven of its airports in Portugal, Serbia and Costa Rica, as part of the 2020 Airport Service Quality (ASQ) Awards, unveiled today by ACI. This ranking, based on passenger votes, is the world’s benchmark for airport quality of service. 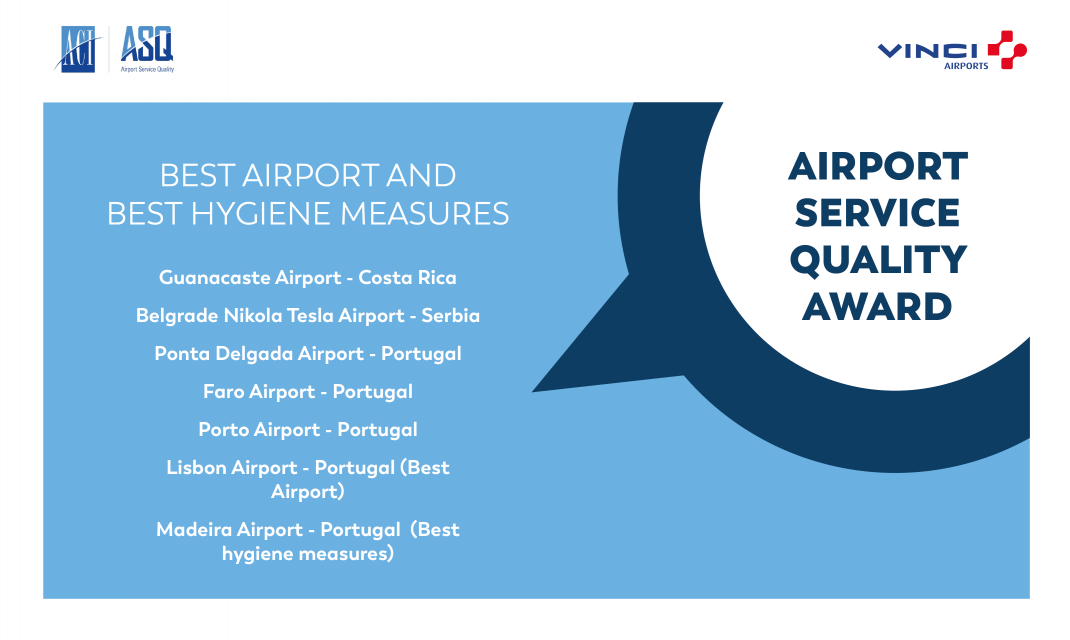 VINCI Airports is once again praised for the adaptability shown by the airports in its network and the experience they have been able to offer their passengers. This year, ACI’s ASQ ranking also rewards airports for integrating specific sanitary measures for travel in the world of Covid-19. In this regard, VINCI Airports stands out for the rapid and global implementation of its campaign of health measures called “Protecting Each Other” – a campaign certified in August by Bureau Veritas in France, the United Kingdom and Portugal, making VINCI Airports the first airport operator to obtain a sanitary validation on an international network of airports.

Rewarded airports of the VINCI Airports network are:

Guanacaste airport in Costa Rica – after being rewarded in 2019 for the “highest service quality progression” only eighteen months after joining the VINCI Airports network, Guanacaste airport this year wins the “Best Airport” and “Best hygiene measures” Awards (Region: Latin America and Caribbean, Size: under 2 million passengers per year). In August, the airport received the Airport Health Accreditation (ACA) of ACI.
Hartsfield-Jackson Atlanta International airport in the USA, whose terminals E and F are operated by VINCI Airports, also receives the awards for “Best Airport” (Region: North America, Size: over 40 million passengers per year) and “Best hygiene measures” (Region: North America).

Nicolas Notebaert comments: “VINCI Airports was able to quickly adapt its health measures to the Covid-19 pandemic, while respecting the passenger experience, which is a pillar of our model. Thanks to the diversity of our network, we will continue to anticipate travellers’ expectations and will keep developing innovations that will benefit to the quality of service in all our airports.”