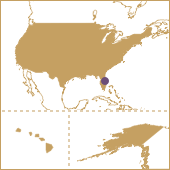 Orlando-Sanford, located in the state of Florida, is the second biggest airport in the region of Orlando, America's 23rd largest city and world theme park capital, with emblematic destinations such as Disney World, Epcot and SeaWorld. Orlando is also the gateway to one of the country's top three tourist destinations, competing with Las Vegas and New York. Orlando-Sanford stands out for its original model of simple, streamlined operation tailored to the needs of low cost carriers, which is why it is today the largest base for Allegiant Air, one of the United States' top 10 airline companies.